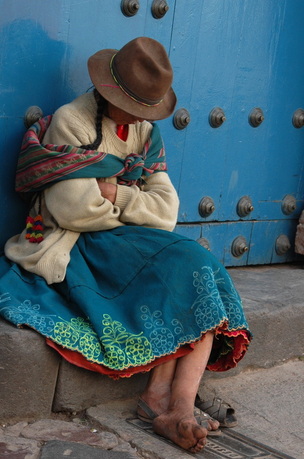 I’ll only tell you the less favourable news if you promise to read through to the good news. Because there is good news, and quite a bit of it.

The biggest newspaper, the flagship of the largest concentration of newspapers in Peru, had an alarming headline: 100% CORRUPTION DISCOVERED IN THIS GOVERNMENT. Easy, it’s the first time that mixed-party groups of parliamentarians tackle corruption in their ranks. Ha! So, yes.

The largest party, APRA (Alianza Popular Revolucionaria Americana), once leftist now mainstream but still living of old laurels, is the fiefdom of Alan Garcia Perez, twice president of Peru. The first time he brought Peru to its knees through creating hyperinflation, the second time he became even fatter and a multimillionaire, now wants to be president a third time (we’ll have presidential elections in 2016) and fights hard against the mud which has been left sticking to him by various investigations. Like a big fish he’s trying to wriggle his way out of it all through clever tactical and judicial maneuvres.

The investigating commission (parliamentarian feelers cautiously feeling) the other day met publicly to give account of their work, and how they came to their conclusions. APRA members where inside the hall where the meeting took place, shouted abuse and tried their darnedest for the parliamentarians not to be heard, and insulted the president of the commission (a thorn in everyone’s side because he seems to be incorruptible). They got thrown out and continued their shameful behavior outside, trying very hard to prevent other participants in the meeting from entering the premises. The national police had to be called in. Now they want us to vote for Alan Garcia again. Why do I say ‘they’ – HE desperately wants to be president a third time.

A pre-candidate for Mayor of Lima has just been found guilty of attacking a police woman verbally and physically, and his wife filed several reports of domestic violence before that incident. He’s stepped down. 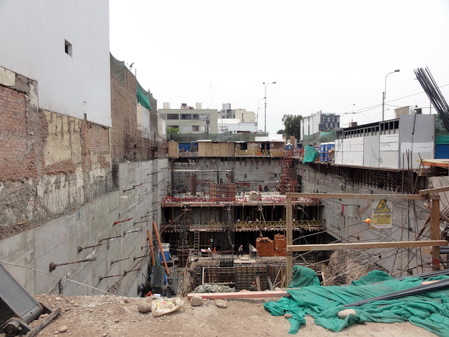 A lot of the Spanish construction companies who managed to bring Spain to its knees are here now, building away. More and more of the beautiful old colonial ‘casones’ make way for modern high-rises and in some cases, where they were protected, an ‘accident’ will occur, and in the morning it is no more.  There are also (only very occasionally) the diggers which, ‘accidentally’, overnight, ruin part of a protected archaeological dig where a company wants to build.

Vandals are smearing graffiti on irreplaceable stones of Inca walls, illegal gold miners contaminate jungle rivers with mercury and other deadly chemicals, Shining Path members are ‘protecting’ the drug growers and refiners in an area called the VRAEM (Valle del Río Apurímac, Ene y Mantaro = the area between the rivers Apurímac, Ene and Mantaro), and ex husbands kill their wives after having been served a restraining order, some children kill their mothers only God knows why.

These events are real, but mainly battled out in the press and on TV, and TV would like us to believe that that’s what there is. But people, like everywhere else, rise above these admittedly sensationalist news.
﻿
Peru is on the rise and on the mend, and many good people are doing their best to contribute to the mending. For example, there is a man called Walter Oyarce who lost his son to football (the young man was thrown from a second-floor (I think) box at the football stadium and landed on the concrete below). The judges just pronounced the offenders guilty and handed down a tough prison sentence and ordered payment of a considerable sum of money in ‘reparation’. Oyarce, instead of ranting and raving, and hating and growing bitter, is using the memory of his son, his time, his money, and soon the money he will receive, in order to talk to the various groups of football hooligans (of which we have many) to promote peace, non-violence, education and even jobs. They are beginning to listen, and so is the country.

Juan Diego Flores is doing his part with underprivileged kids.  The Peruvian tenor works with Symphony for Peru, a symphony orchestra composed of children and adolescents from low-income families and a great talent for music.

Some of the oldest and poorest of the country now receive a pension, albeit small (they had absolutely nothing before), some of the poorest kids can now eat in schools (the government programme ‘Qali Warma’ had a rocky start, partly because of inexperience, inefficiency and corruption), but it’s in place and those responsible are learning. It’s run by the Ministry for Development and Social Inclusion. Qali Warma is a Quechua word meaning ‘strong boy/girl’, and aims to provide quality food service to children of the initial level (from three years old) and primary public educational institutions throughout the country. It’s another start in the right direction.

The government has created scholarships for gifted youngsters of low-income families, again, it’s still in its infancy and suffers from teething problems, but it’s a beginning.

More roads are being build (also to bring more regular crops to market – you can’t grow tomatoes instead of coca if you can’t transport and sell them, for example), more coca crops are being destroyed, more drug-plane landing strips made useless, more drug transports intercepted, more mafia gangs arrested (let’s hope they can’t any longer buy their way out), more corruption is being uncovered and prosecuted… world, we are getting there.

Our ministers have just given themselves a considerable pay rise, hopefully doing two things: attracting young professionals into politics and, perhaps - feeling some embarrassment - re-opening the spiky-road discussion of a higher minimum wage for all.  Well, even Obama has problems with that one.

I have the greatest hopes for Peru, and I am happy here. A lot needs to be accomplished in a relatively short time. 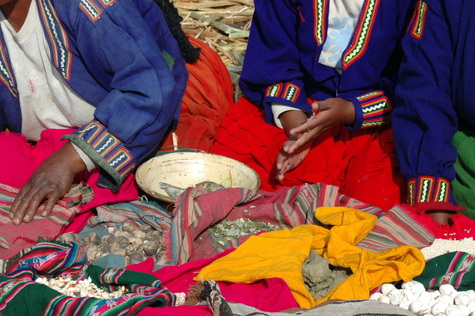 The beauty, magic and mystery of Peru is beyond question, and tourists are streaming into the country in ever greater numbers. More and more areas are creating the sort of infrastructure needed to receive tourists, and more and more people know how to find Peru on a map. This is a country on the way to true democracy and wellness, however long it takes. Even though I am an optimist by nature, all the signs point in that direction.

A bad joke? I couldn’t resist this one:

Two old men, Mike and Joe, have been friends all their lives. When it's clear that Joe is dying, Mike visits him every day.  One day Mike says, "Joe, we both loved football all our lives, and we played football on Saturdays together for so many years. Please do me one favour, when you get to Heaven, let me know somehow whether they have football up there."
Joe looks up at Mike from his death bed, "Mike, you've been my best friend. If it's at all possible, I'll do you this favour”.
Shortly after that conversation, Joe dies.
A few nights later, around midnight, Mike wakes when there is a blinding flash and a voice calles him, “Mike… Mike…"
Mike, sitting up suddenly: “Is this you, Joe?”
“Yes, Mike, it’s me.”
"Joe! Where are you?"
"In heaven", replies Joe. "I have some good news and some bad news."
"Tell me the good news first," says Mike.
"The good news," Joe says," is that there's football in heaven. Better yet, all of our old friends who died before us are here, too. Better than that, we're all young again. Better still, it's always spring time and it never rains or snows. Our wives are there too, and young and pretty as ever! And best of all, we can play football all we want, and we never get tired!"
"That's fantastic..." says Mike, "...and beyond my wildest dreams! So what's the bad news? "
"You're in the team for this Saturday".

And a recipe with bells on: 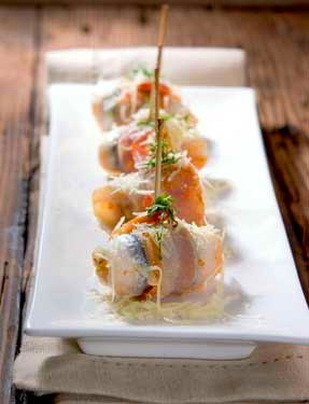 HOT CEVICHE PEJERREY
(Pejerrey is called Silverside Fish in English and, as far as I could find out, it doesn’t exist naturally in Europe. The Atlantic Silverside is fished in the North of the US and Canada, the rest in warmer climes). I suspect you can use small fresh sardines or biggish fresh anchovies for similar results. So I left the Spanish ‘pejerrey’ without translating it, hoping you find a best equivalent.)

Preparation:
Cut the pejerreyes lengthwise so that you get two small fillets. Wrap a fillet of pejerrey into a strip of bacon (skin towards bacon) and prick it with a toothpick. Place the rolled combinations in a bowl and squeeze lemon all over them. Leave them for ten minutes.

Place the pepper (take out the seeds!) into a blender together with the onion, garlic and lemon juice marinade. Pour over the pejerrey/beacon rolls.  Place for 15 minutes in a preheated oven at 180ºC. Remove and immediately sprinkle the grated Parmesan cheese and chopped parsley over the rolls. Serve immediately.

Friends, I’ll be back in Madrid middle May, in London from early June to middle July. Have tablet, will e-mail .

My granddaughters are nearly four years old. And I am four years older. Time flies. I leave you, as always, with a few fun pix:
Powered by