This winter goes down in history as one of the longest and coldest in Lima’s history. We had a few days 12º - and humid. Brrr.  Not nice. Thing is that we don't have heating in the houses. I bought a few gas stoves which save my life.  21 September it’ll be officially Spring here in the Southern hemisphere and I can’t wait.

From Madrid I only heard sighs and lamentations because the heat became almost unbearable. From London came happy sounds from people who hardly ever have consistently warm and pleasant summers. It started as soon as I left. I take this personal.

As I write this post I see the sun for the first time, the sea, the islands. The heavy cloud which often sits on my terrace has moved on for a few hours. Still, we may be over the worst, but it’s not quite over yet. Tomorrow morning it’ll hang about again. 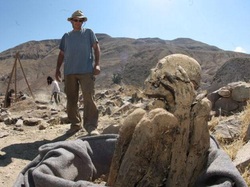 News from Peru are quite a few and rather interesting. This is an excerpt from the ex-pat online news pages, ‘PERU THIS WEEK’:
(Photo: El Comercio/Dante Piaggio)

‘A dig in southern Peru co-sponsored by the US Institute for Field Research and the Universidad Privada de Tacna has resulted in some interesting finds for the archaeologists working at the site. El Comercio reports that investigators have found around twenty bodies at the tomb site, as well as a number of well-preserved earthenware vessels.

Among the bodies found at the Moqi tomb complex is a middle-aged man who researchers believe to be ethnically Incan. Other bodies at the site belonged to a local group not made up of an ethnic Incan population, reports El Comercio. However, the presence of Incan pottery, as well as clay artifacts made by the local population, has led investigators to believe that the inhabitants of Moqi definitely had trade relations and contact with the Incas.

Archaeologists were able to identify the middle-aged male as ethnically Incan because of the distinctive extra bone in his skull, known as the “Inca bone.” This kind of bone formation was unique to Incan people, indicating to scientists that the man may have been an official representative of the Inca empire living in the area, reports El Comercio.’

Now did you know that about the extra bone? I had no idea! So I tried an find out more. In Wikipedia
I found something on the subject : 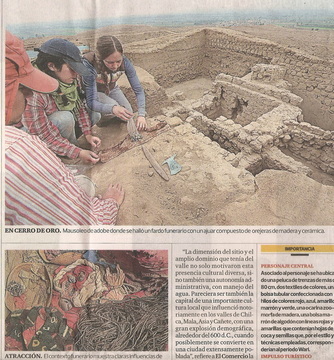 Lucho’s niece Francesca was also hard at work in Serro de Oro, at San Luis de Cañete, a few km south of Lima, where she is the lead digger at an important archaeological site. They just made the discovery of a bundle of stuff the high-born used to be given to accompany them on their way into the afterlife.

An excerpt translated from the article in the Peruvian newspaper EL COMERCIO:

‘Protected by an adobe mausoleum, gable and walls painted white with red stripes - simulating lightning, a few days ago a funerary bundle with Wari features has been discovered in one sector of the archaeological zone at Cañete.

For about two years a team of researchers excavated several archaeological areas to define different cultural periods at this monumental area of 150 hectares.

"During these excavations, which have enabled us to locate the grave of this important character, as demonstrated by the furnishings found, we could define different periods at this side: we found a Nasca influence,  some features of the Lima culture, clear evidence of the presence of the Wari* and even a tenuous presence of a local manor called Guarco, finally conquered and subjected by the Incas,” explains archaeologist Dr. Francesca Fernandini  Parodi, who heads the team of twelve researchers."
There is more.

Then we see on TV and read in the papers of various places in Peru where hard-at-work developers – the big guys and the little ones - have yet again bulldozed an archaeological site (quite a few already excavated) because they wanted the (protected) land for building and don’t give a shit. Once it’s gone, it’s gone. Oy vey. I have no news whether those Mafiosos have been caught, hung, drawn and quartered. Can you believe that they did this in Nazca?

Peru is digging and digging (for profit and to find the Peruvian past). I hope the latter win the day. We don’t really want another construction bubble as the one that floored Spain. Ojala.

Another thing you didn’t know is that there now is a second trail do reach Machu Picchu : 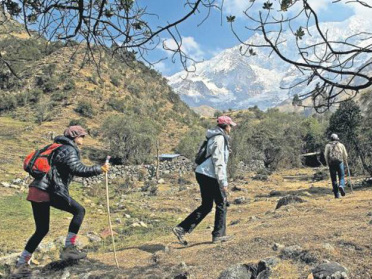 A five-day walk from the snowy heights of the mountains to the jungle of Machu Picchu.

Salkantay: the other trail to Machu Picchu

From PERU THIS WEEK:
The traditional trail that goes from Ollantaytambo isn’t the only route to Machu Picchu.

"The journey that runs through the pass of the snow-capped Salkantay, the second tallest mountain in Cusco, is a unique five-day walk that starts from the village of Mollepata, three hours from Cusco, which takes you from the snow-capped mountains at an altitude of 4.600m to the high jungle of Machu Picchu.

The first days starts with a short walk to a small lagoon crowned with one of the glaciers of the Vilcabamba mountain range, where the profound silence is only interrupted by the sound of flowing water. This place is dominated by the turquoise waters of the springs, which make a sharp contrast with the white of the snow and the intense blue of the sky.

The snowy territory of Salkantay gives us an awe inspiring landscape crowned with snowy peaks. The immensity of it all makes us feel tiny. The walk continues and each step surprises us with a beautiful stage where nature is the star of the show.

On the second day of our journey we entered Salkantay Pampa, at 4,200m, territory crowned with a large mountain. Salkantay translates as ‘indomitable’ and, as the Andean people know very well, very few have reached its peak. Salkantay is famous among Andeans for its constant and unpredictable avalanches that have taken the lives of several climbers.

After an even slope, we arrived at the Salkantay pass, where a sign and cairns (stone markers of piled up stones) made by other travelers showed us that we have arrived at 4,549m.

We looked around us and felt that we could almost touch the snow and arrive at the other face of the snow-capped Tucarhuay, with its panoramic views of snow-capped mountains like the Pumasillo, at 6,100m, as well as other mountains of the Vilcabamba mountain range.

The walk continued, this time downwards and with the landscape changing at every step. The mountains of Vilcabamba showed us a different face at every stage of our journey. We left the imposing presence of the snowy Tucarhuay behind us to go into a cloudy forest.

The downward trek took us into the forest where we were suddenly surrounded by orchids, butterflies, leafy trees and waterfalls crossing the natural trail. The landscape, each time greener, completely took over that of the mountains.

The crossing at the Santa Teresa river announced the arrival of our next destination: Collpapampa, where we breathed deeper, the sun warmed us and we left behind the snowy peaks and the forest that had received us. It was time to rest and count shooting stars.

We continued the journey and the next day we entered the forest to take the Inca Trail that would take us to the complex of Llactapata, Incan control point where we could see Huayna Picchu in the distance. We took another look and another walk, and arrived at our grand final destination: Machu Picchu.

We remembered our trail companion: the Salkantay. Thousands of images and starry nights came to our minds and we arrived ready to be dazzled by the great Incan sanctuary." 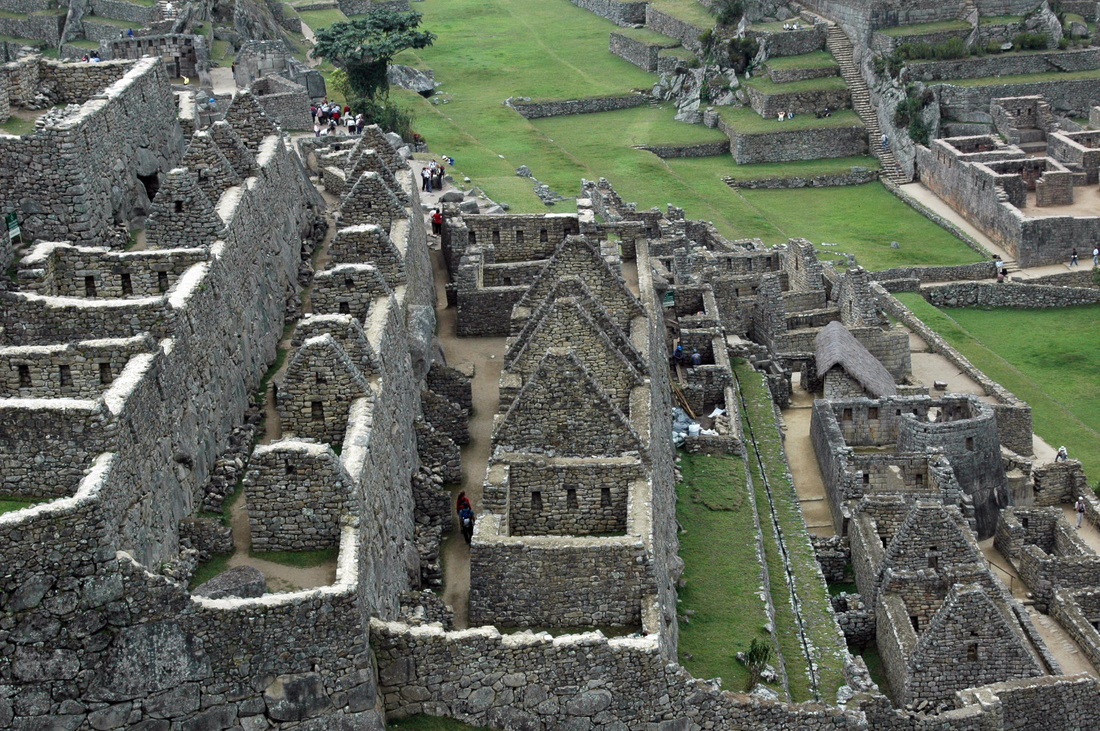 Anything else? Oh, yes… We are in for another few days of MISTURA, the Peruvians celebrating their (excellent, scrumptious, irresistible) food. Sadly, I won’t make it, even though it’s only a stone's throw away from me. I can’t stand crowds and then, how much can you eat? For one dish you don’t go to MISTURA, and more than one I can’t possibly. They reportedly have 80 different desserts. Holy cow… I have seen videos of Peruvian ex-president Alan Garcia wolfing down SIX second courses. It shows. He is already gigantic and getting wider. 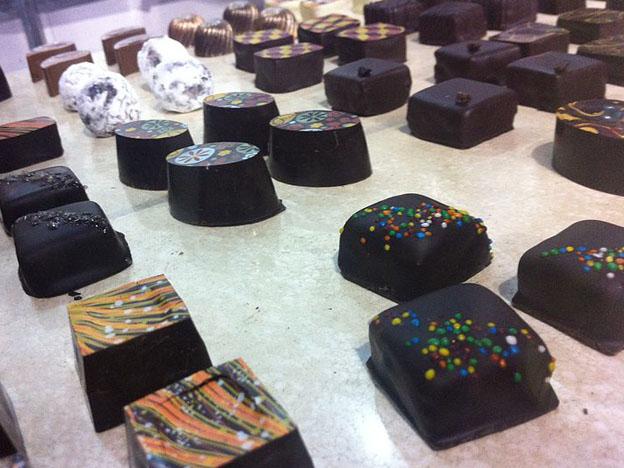 
I am fortunate to have the best of both worlds: I can spend almost three months a year in Europe and see my friends and re-connect. But after a while I miss Peru as well. It’s growing on me. And I always know when I am ‘home’ somewhere: I get cantankerous – bitch about the traffic, the pollution, the politics, the corruption… Sigh. Barbara told me yesterday that her father called this ‘doing the emotional split’. Sounds about right, but I must have about eight legs ‘doing the split’.

The recipe today is one of the most emblematic ones of Peru’s cuisine. If you can’t get ají, chili will do. Chicken in ají sauce is delicious. Prepare to be seduced :


and don't forget: for the best Peruvian recipes go to Yanuq   (you can switch to English)

And the joke? The jokes are getting worse, especially when reality catches up with invention. From THE DUBLIN TIMES about a bank robbery on 2nd March:

“Once  inside the bank shortly after midnight, their efforts at disabling the security system got underway immediately. The robbers, who expected to find one or two large safes filled with cash & valuables, were surprised to see hundreds of smaller safes throughout the bank.
The robbers cracked the first safe's combination, and inside they found only a small bowl of vanilla pudding.
As recorded on the bank's audio tape system, one robber said, 'At least we'll have a bit to eat.'
The robbers opened up a second safe, and it also contained nothing but vanilla pudding. The process continued until all safes were opened.
They did not find one pound sterling, a diamond, or an ounce of gold. Instead, all the safes contained covered little bowls of pudding.
Disappointed, the robbers made a quiet exit, each leaving with nothing more than a sick, uncomfortably full stomach. The newspaper headline read:

'See you' next month some time. Be well.
Powered by