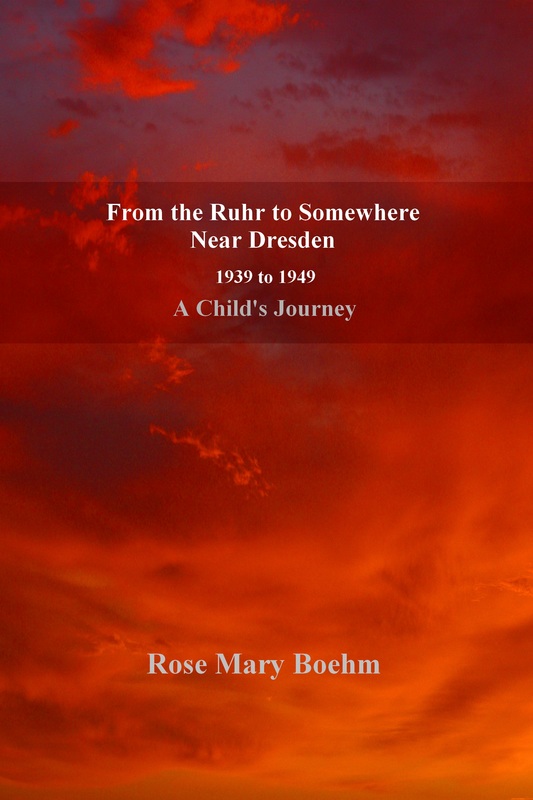 What other poets had to say about this new collection of poems:

Whether Rose Mary Boehm did or didn't experience the events in these poems, her skill as a poet makes the question irrelevant. Readers will experience what it was like to be a child in Germany at the end of WW I.


Written from the perspective of a child in World War II, Germany, these poems illuminate how life can proceed despite bombs, shelters, fear and privation. Rose Mary Boehm's poetry is both informative and lyrical; her book a genuine delight.

In these remarkable poems we experience WWII through a child’s eyes. Rose’s mother has fled the Ruhr with Rose and her brother. The three of them settle in a small village outside of Dresden. Her father is away. Rose has little understanding of where or why. Life is hard.  They aren’t used to deprivation or country living. Rose is mocked for her “posh accent.”  Her mother scrubs clothes by hand. Then the air raids, the terrifying air raids follow them there. “On the radio there is another voice. It is a hard one, loud and excited. Rising, rising. My stomach cramps…Mother… turns the voice off.” You will not forget this book.

These are not poems about war, but hope. The message is that children in all the horror have a different perception of events. This story told in poems should perhaps be read in schools and colleges. The poems are terrific and continue to reverberate long after you're finished reading.

A review by Scott Witaker

Rose Mary Boehm’s volume of poetry From the Ruhr to Somewhere Near Dresden 1939 to 1949, from Aldrich Press, is poetry as memoir, memoir as poetic expression, and it details the author’s life during the allied night air raids on Germany to her escape from the industrial war machine cities and townships of the Ruhr Valley to the outskirts of Dresden. Boehm’s voice floats through these poems as echoes, ghosts from the past that like the scars of war, come back to live with us in the present. Much of Boehm’s poetry is written in the present, putting the emotional immediacy right in front of the reader. The poems are not titled. Instead they are numbered, and the numerical titles resonate with the content. From the Ruhr depicts the horrors of war, and shows us the atrocities of the Nazis from the POV of German citizens, and the numbers add another layer of dehumanization to war, like concentration camp prisoners, these poems have no name. Consider these lines from poem three: He tells me that in the Hitler Jugend they play guitar and sing around campfires and go on long marches.

I want to be like him when I grow up.

The irony hangs over the child’s final line, but the real irony is the love and affection the older brother receives from the Nazi youth leaders; how awful to be loved only to be raised to hate; the machinations of love doled out as youth education programs for the state. Branded, reeducated, and stripped of compassion for enemies of the state, the Hitler Youths were a different kind of evil altogether. Luring, and preying on vulnerable boys. Boehm’s brother is not depicted as a bad person, in fact he is like a ghost in the poems, haunting them but never fully materializing, but the idea that he was a Hitler Youth hangs like a shadow over the family.

The early poems buzz with this friction. The war industry of the Ruhr would have brought prosperity and economic freedom to the families living there before the war, as well as state funded youth education and other “benefits” of the Nazi regime. In a later poem in the first section the mother tries to comfort the child by calling the falling signal flares released by bombers flying overhead “Christmas trees” while little Boehm is “wrapped in a blanket, sitting on Mother's arm” during “night time. Danger time.” The two contrasting emotions of a child’s surprise, Christmas, with the promise of more bombs, the flares, is the kind of theatre From the Ruhr creates. The poetic form serves the memoir well, the crispness and short lines add a great deal of nuance to the elegies. Here, in Boehm’s poems, the short form elevates the content, impacts the emotion, and forces the reader to see the juxtapositions.

One of the surprises of From the Ruhr is not necessarily Boehm’s flight from the war torn valley, but rather how the “posh girl” is a fish-out-of-water in the countryside of Dresden, in East Germany. The narrator disbelieves her own eyes when it comes to life, and discovery, a point of view that is shaped not so much by war, as it is by class. City kids don’t inherently understand that life is about creating life, at least not like country kids do:

They call me a refugee and laugh
at the way I speak; they call me 'posh'.
.... I can see a little hole.
Ulla says that is where the eggs drop out.
I don't believe her. The hole is too small.

From the Ruhr illustrates war’s often overlooked victims, the cognitive development of anyone in the war zone. Boehm’s lines remind us that it is not just soldiers that die, but also our imaginations. They wither, often when neglected, and during war one of the things that stretches a soul thin is the lack of mental and emotional inspiration. Children are perhaps the best worst examples of this kind of ruination. “The nicest thing about Frau Krämer is her back room./ In her back room she has a big trunk full of books.... When I open a book/ and hold it close to my face, it smells musty/and lets me forget I am hungry.” The image of hunger is a doubled one. The body and mind need nourishment, and while food takes priority, for some minds books and art and beauty are just as important.

Boehm’s poems cover the breadth of war, from Germany’s rise to its fall. The book's second act explores the horror of the Red Army’s occupation of Germany after the Allied forces left. The Red Army’s shadow was just as ominous as the wings of a bomber overhead, or the shadow of an approaching American tank. The family unit is still in danger, perhaps even more so, by a conquering army that feels entitled to women, property and reparations. The rape of a young East German girl while the family hides out prompts Boehm’s family to flee back to their home in the Ruhr:

We carried little. There were guides who took people
across secret, infrequently-guarded border points,
but many stories told of people who had given
these guides all their money only to be abandoned
to possible arrest and transportation to labor camps
or even death. So Mother decided that we’d go it alone.

And the book leaves with the worst irony of all, upon returning home, her family are strangers to their surroundings, refugees in their own nation.

We are home and walk from the station
through streets I have never forgotten.
It’s just that everything is much smaller
than I remember.... We walk into the house.
There is no front door....
I am now going to the school across the road,
just as my brother used to do. The children laugh
at my funny accent and call me a stupid refugee.

They have come full circle in their suffering, from refugee to refugee. Boehm’s family is flung from one part of the country to the next, seeking peace, seeking refuge from the bombs. Her family leaves a heavily attacked area to move near the city which suffered one of the most devastating bombing raids in history; a giant contrast to the destruction drones and well placed heat seeking missiles can do in our app driven world.. Dresden was wiped out at the end of WWII. The reader, at least, can reside in the hope that her family fled back to the Western side of the country, leaving behind the Iron Curtain, a glimmer of light that Boehm leaves the reader with, the shadow of the greatest generation's war behind her.